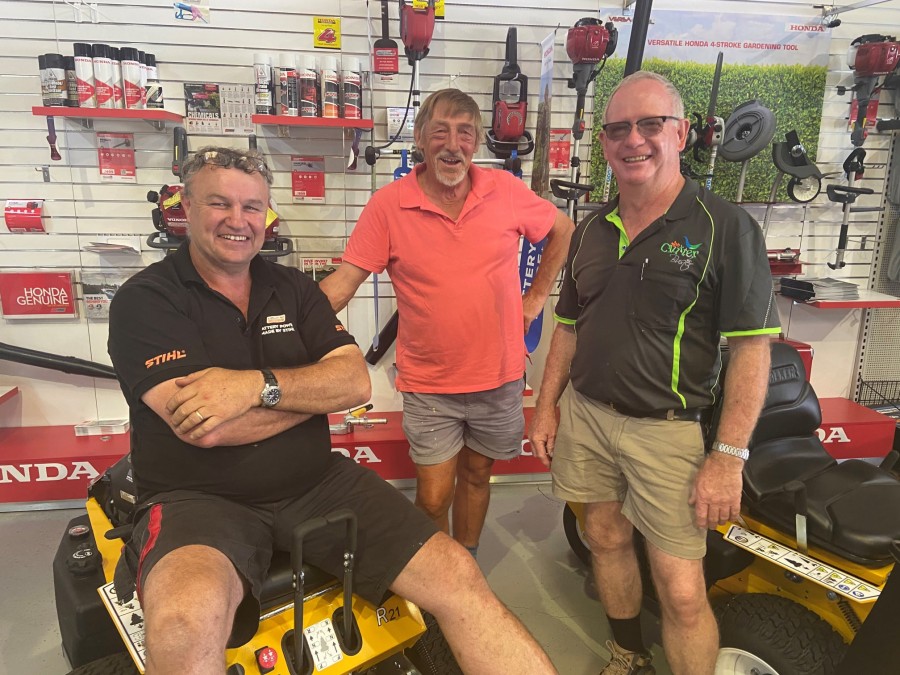 Brian “Bushy” Johnston grew up and went to school in Inverell. He pursued Metallurgy work at BHP Newcastle then worked in the building industry before returning to Inverell and taking up the helm at Motor Mecca.

For Bushy, purchasing Motor Mecca became his next personal challenge. The only small engine he owned prior to taking over the shop was a Victa 21 push mower. His backyard was a hive of activity during the summer of 1991 – 92 to learn all about this equipment. He relentlessly read books, questioned staff and staged many conversations to educate himself about small engines.

Since he had been out of town for a while, Bushy decided to construct an advertising campaign so that Inverell knew Motor Mecca was in good hands. One particularly effective ad went like this: ‘Pssst, I hear Motor Mecca is getting a new boss…’ The dual message was quite lost on the unsuspecting public – staff at Motor Mecca were bombarded with questions as to where Bushy was going and who was taking over. This continued for two weeks until the new Stihl Farmboss range landed in store.

AgQuip field days continued as a highlight on the Motor Mecca calendar. From June onwards, everything revolved around gearing up for AgQuip, particularly in the early years prior to the shed being constructed on the AgQuip site. Everything had to be transported to Gunnedah, from marquees, display stands and hay to staples and bankcard zip machines. One memorable year, at 4pm on Thursday, an announcement was sent out, “A big storm coming, everyone should leave.” 1mm of rain fell and there was only a slight pickup in the breeze. Bushy’s team lost their best hour of trade and only sold two generators, two chainsaws, a vacuum cleaner and a hedge trimmer that day.

Keeping up the Skills

The thrill of conference time, and company trips paid for by Stihl, Honda or Victa gave an enormous sense of satisfaction for Bushy. He made sure that staff received adequate training, skills and accolades according to their achievements. The thrill of a company trip was reassurance that he was doing a good job since the boss rarely hears this on a day by day basis.

Motor Mecca has always had a great name for quality Stihl, Honda, Cox, Briggs & Stratton and Victa products. Bushy saw Stihl’s range triple and Honda’s double under his management. The tradition of quality products, after sales service and maintenance stands the test of time and continues as the legacy that is Motor Mecca.